The UK produced eight new unicorns in 2019 – including Cambridge-based CMR Surgical – with annual investment leaping by 44%. Cambridge is one of the 12 top destinations in the world for venture capital investment, beating cities like Oslo and Dublin. 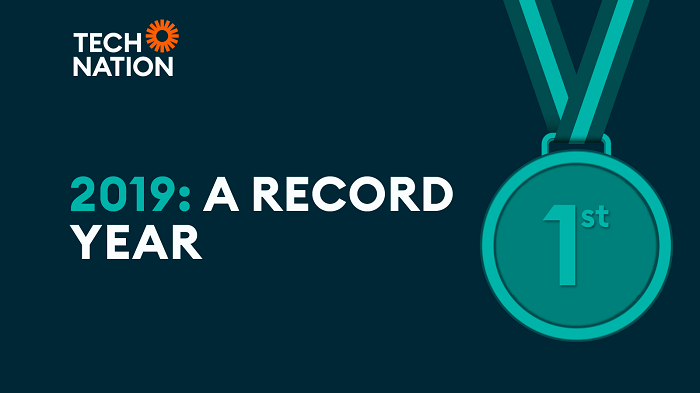 15th January, London: In what was another record-breaking year, investments in the UK tech sector soared to $13.2 billion in 2019, according to latest industry figures – a $4.1bn increase on 2018’s very strong figures and the highest level in UK history.

Research prepared for the Digital Economy Council by Tech Nation and Dealroom.co shows that between January and December,  UK companies secured a third of the $39.8bn raised during the year in Europe. In particular, UK-based tech firms received more VC investment than Germany ($7bn) and France ($5.2bn) combined.

The number of rapidly growing UK tech companies soared as venture capital investment increased by 44%. Growth in VC investment exceeded 40% for the third year in a row. To put this growth into perspective, investments in France grew by a little over a third compared to 2018, while Israel’s investments rose by a fifth. The US and China, instead, both saw investment numbers plummet by 20% and 65%  respectively.

On a global scale, the UK’s performance in 2019 means it now sits behind only the US and China in terms of total venture capital funding received in 2019 and on a city-level, London joins the Bay Area, Beijing and New York at the top of the world’s most-funded locations. Companies headquartered in London raised $9.7bn during 2019.

Almost half of the UK investments ($6bn) in 2019 came via US and Asian investors and the UK tech sector recently overtook the US for foreign investment per capita. What’s more, when compared to Germany and France, the UK had the widest overall mix of foreign versus domestic investors.

While eight more billion-dollar companies or unicorns were created in the UK in 2019 – taking the total number based in the UK to 77 – the amount being invested in early-stage companies increased, reaching $5.1bn in 2019 up from $4bn the year before.

2019 saw the number of early-stage investment rounds grow by 20% year-on-year.  While among more mature companies, a total of $5.4bn was invested in rounds exceeding $100m in 2019 – more than twice the amount invested in such rounds during the same period last year.

Of the highest-value UK rounds, five companies raised more than $250m each, and three of those exceeded $500m in a single round.

2019 saw one of the UK’s largest ever Series A investments, made in payments processor Checkout.com ($230m) in May, and the largest UK round of all time, which saw $800m being invested in supply-chain fintech Greensill in October just five months after the company had raised $655m.

The unicorn capital of Europe

Since 2014, the UK has produced more than twice the total number of $1bn tech companies than any other country in Europe, and sits behind only the US and China when it comes to building fast-growing global firms.

While London remains the leading city for unicorns in the UK, having produced a total of 46 unicorns since 1990, Manchester, Oxford, Cambridge, Edinburgh and Bristol have produced a combined total of 20. Of the latest unicorns to join the list, OVO Energy adds to Bristol’s tally while Cambridge-based CMR Surgical pushes Oxbridge’s combined total to 11. Two unicorns are based in Leeds: Sky Betting & Gaming and TransUnion UK.

Six UK cities rank amongst the top 26 cities in the world for raising venture capital in 2019, these are London ($9.7bn), Cambridge (12th), Bristol, Oxford, Manchester and Edinburgh.

The UK leads the way in fintech, AI and clean energy

The UK’s success in attracting venture capital investment in 2019 also fuelled, in part, a surge in the UK’s best performing sectors – fintech, AI and deep tech, and clean energy.

Again, when compared with Germany and France, UK fintech firms raised $5.4bn last year – an impressive 7.5 times the amount raised by French fintechs, and three times as much as fintech firms in Germany.

In AI and deep tech, investments in Benevolent AI ($90m), Melody ($60m) and Wayve ($20m) helped push the investment total across these sectors to $3.2bn  – up from $2.6bn from 2018, and twice that invested in Germany and France’s respective sectors.

While clean energy is a smaller market, OVO Energy’s $260m deal, alongside $81m investments in photovoltaic and solar panel firm Oxford PV and BBOXX, similarly helped push 2019’s total investment in this sector to just short of $1bn for the first time, which is a 45% increase on 2018’s figures.

Digital Minister Matt Warman said:  “It's fantastic to see Britain continues to be the best place in Europe to start and grow a tech business, with record-breaking investment and the creation of eight new billion dollar companies last year.

“This roaring success is testament to our business friendly environment, talented workforce and longstanding reputation for innovation.

“As we head into a new decade, we want to keep up this momentum ensuring the tech sector flourishes right across the country, helping more entrepreneurs turn their ideas into business successes and strengthening the nation's digital skills.”

Science Minister Chris Skidmore said: “We are committed to making the UK a global science and innovation superpower, and this report shows we have the thriving technology sector needed to deliver on that ambition.

“By investing record amounts in R&D, artificial intelligence and clean growth, and by ensuring our regulations foster, rather than hinder innovation, we are helping to build a technology sector that can rival global powerhouses like the US and China.”

Natalie Black, HM Trade Commissioner Asia Pacific, said: “Asian investors are taking a keen interest in the success of the UK’s tech sector and are enthused by our record of building unicorns and leadership in key sectors like AI and clean tech.

"The Government is supporting more and more tech companies across the UK who are looking to expand in Asia and I have seen first-hand a step change in collaboration and investment in this part of the world, which is bringing exciting opportunities at home and overseas."

Gerard Grech, Chief executive, Tech Nation said:  In 2019 the UK secured a formidable 33% of all European Tech investment, at $13.2Bn, despite accounting for roughly 9% of Europe’s population. Equally exciting is the rapid expansion of digital tech growth across the UK regions, which augurs well for national GDP growth and a truly connected Britain. At Tech Nation, we are also working on an international vision. UK tech businesses are now well poised to forge new international partnerships and global ventures, enhancing tech growth across borders.”

Ronan Harris, VP and MD, UK and Ireland, Google said: “Every country in Europe wants to build a thriving tech sector and the UK has achieved that. We are delighted to be committing more investment to our UK business, over the course of the next decade. At Google, we want to help young tech businesses reach scale to help build a thriving, dynamic economy. These investment figures show that lots of other major tech investors have the same view and these are exciting times.”

Cindy Rose, UK CEO, Microsoft, said: “These numbers clearly show that if you want to invest in a high potential technology business, then you need look no further than the UK.  Our fast-growing tech companies, supported by a highly skilled workforce, are laying the foundations for continued success in decades to come. Equally importantly, we must make sure that we fully embrace the power of technology and AI to help strengthen our economy, ensure our future competitiveness and tackle some of the major challenges facing our society.”

Justin Kelly, Director of Business Development, Siemens PLC said: “It’s exciting to see the extent to which the tech sector is spreading across the regions of the UK, creating good jobs and opportunities for lots of people. Tech in the UK is changing traditional industries like manufacturing, the energy sector and transport and making them more efficient and sustainable.”

Companies that became unicorns in 2019

Per Vegard Nerseth, CEO, CMR Surgical said: “From our headquarters in Cambridge, we are strongly positioned to transform the global market of minimal access surgery with Versius. We are excited about the opportunities that are opening up to make minimal access surgery more accessible to patients around the world. The UK has an important role to play in MedTech and we are proud to be leading the way.”

Guillaume Pousaz, founder and CEO, Checkout.com said: “The UK’s fintech sector is one of the most competitive in the world and that is thanks to the extraordinary quality of engineering talent that you can find here and the fact that the UK has one of the world’s most forward-thinking regulators. We are excited about the path ahead of us and extremely ambitious about where we can get to, in part thanks to the supportive environment here.”

Per Vegard Nerseth, CEO, CMR Surgical said: “From our headquarters in Cambridge, we are strongly positioned to transform the global market of minimal access surgery with Versius. We are excited about the opportunities that are opening up to make minimal access surgery more accessible to patients around the world. The UK has an important role to play in MedTech and we are proud to be leading the way.”

Clare Gilmartin, CEO of Trainline said: “It’s been another successful year for UK tech and Trainline in particular, having listed on the stock market in 2019. As one of the fastest-growing European tech companies, we’re committed to driving innovation and developing cutting-edge technology to improve the rail and coach travel experience and encourage people to make greener travel choices. With over half of our 600-strong team consisting of travel tech specialists, such as developers, data scientists and engineers, we know that investment in tech and the UK continuing to attract the finest, diverse talent is crucial to the future success of the industry.”

Ali Parsa, CEO of Babylon said: “Our mission at Babylon is to put accessible and affordable healthcare into the hands of everyone on earth. Our recent investment will allow us to maximise the number of lives we touch across the world. We have a long way to go and a lot still to deliver. We are grateful to our investors, our partners and 1,500 brilliant Babylonians for allowing us to forge ahead with our mission.”