Shop volunteer Vanessa Moore feels it was written in the stars that she would one day support East Anglia’s Children’s Hospices (EACH). 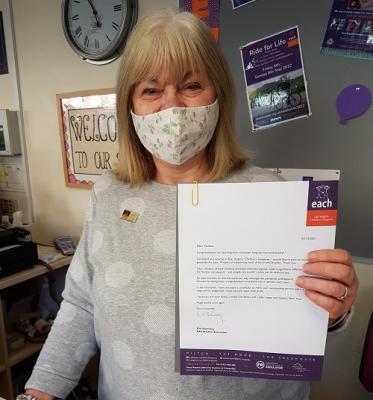 The 70-year-old has a special bond with the charity as grandson Joseph, who turns 14 next month, continues to receive care at the Milton hospice.

He was born with tuberous sclerosis – a rare genetic condition that causes mainly non-cancerous tumours to develop in different parts of the body.

Joseph developed them in his brain and, as well as receiving care from EACH, he has also spent time at Addenbrooke’s Hospital and Great Ormond Street Hospital.

Vanessa Moore says “My grandson and our family have been helped tremendously,” said Vanessa, who was speaking during the charity’s We Need You campaign, which launched this week and runs until 28th January. The aim is to recruit more shop volunteers like her, to help in one of the charity’s 44 shops across East Anglia.

“However, he’s a lovely, beautiful boy and we’re so blessed to have him.

“EACH has been a comfort all the way through. The hospices are marvellous places and I think some people have the wrong idea, thinking they just deal with death.

“That’s not the case at all. It’s about creating memories and living life to the full – for the children and young people but also siblings and the whole family.

“I can’t praise the organisation enough.”

Joseph still goes to Milton and Vanessa, who was a teaching assistant during her working life, felt it was fate she would one day volunteer for EACH.

She was walking through Whittlesey, in Cambridgeshire, shortly before the charity’s shop opened in July 2011.

Upon hearing the charity was opening a shop there, she was keen to get involved.

Vanessa goes on to say “I helped out before the shop opened, putting clothes on rails,” said Vanessa, who lives in Coates and is married to John. She has two daughters and another grandchild – Joseph’s seven-year-old sister, Isla.

“I have an extra special bond because of Joseph.

“I would have done some kind of volunteering anyway. However, having that connection is very important to me.

“In terms of volunteering, I get so much from it and would recommend it to anyone.

“I can understand people might be a nervous to start with but there are so many different roles and jobs.

“They can always find something that particularly suits them, in line with their strengths and interests.

“I did some steaming and sorting to start with but it was when I started working on the till that I really fell in love with it.

“I’ll do anything that helps, though, and it’s always a fun, busy environment.

“It’s very much a case of the more the merrier and we always need more volunteers.”

Vanessa, described as a “very loved and valued volunteer” by shop manager Sue Reeves, recently received her ten-year service badge and works in the shop on Wednesday mornings.