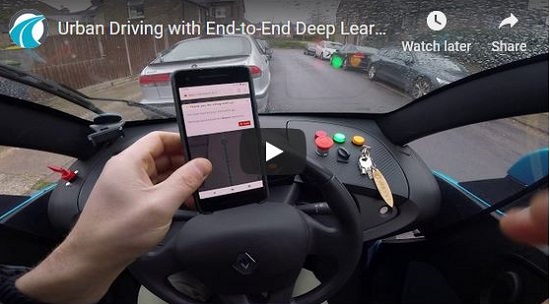 Wayve secures $20M funding to facilitate autonomous vehicle trials in one of the world’s busiest cities.

Alex and Amar set up Wayve whilst studying for their PhDs at the Department of Engineering. “I don’t know of any other university in the world that has such a culture of research excellence that also supports entrepreneurial commercialisation. It’s a unique set-up that I could start a business, raise venture capital, and still retain a research position and do open-ended research at Cambridge. I feel very lucky,” says Dr Alex Kendall. “A lot of other universities wouldn’t support this, but here you can – and it’s resulted in some pretty amazing companies.”

Wayve, a startup dedicated to accelerating autonomous mobility through learning based approaches instead of hand-coded rules, have announced a $20M Series A funding round to launch a pilot fleet of autonomous vehicles in central London.

The investment was led by Eclipse Ventures, with participation from Balderton Capital and existing investors Compound, Fly Ventures and firstminute capital as well as several undisclosed preeminent leaders in machine learning and robotics.

Wayve believes that the complexity of self-driving cars will be solved by better artificial intelligence “brains,” not by more physical sensors and hand-coded rules. Launched in Cambridge, arguably the birthplace of modern computing and artificial intelligence and recently relocated to London, this is the first time a European self-driving car company has attracted premier Silicon Valley venture capital funding to lead a Series A investment.

In Spring 2019, Wayve publicised an unprecedented achievement, demonstrating a self-driving car navigating on roads it had never previously driven before. This had been accomplished by using only cameras, a 2D map, and a unique, end-to-end, deep learning driving brain.

A good human driver can quickly adapt to navigating a new jurisdiction, however existing autonomous solutions lack the requisite ability to detect and respond appropriately to potential hazards. By contrast, Wayve is committed to building a general and scalable driving brain applicable to any driving environment.

End-to-end machine learning based systems have dominated traditional rule-based approaches in natural language processing, image recognition, speech synthesis and more. “As computational power and data continue to grow, learning-based approaches will become more inevitable, especially for mobile robotics,” said Amar, “the human brain has evolved over millions of years, computers have only had a few decades, but are catching up quickly.”