What next for graphene? 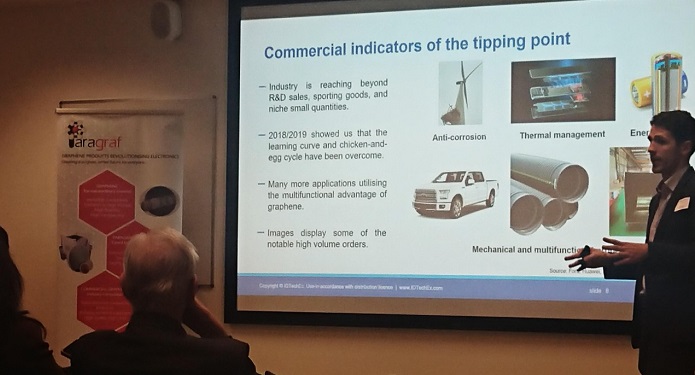 Graphene has long been heralded as the wonder material, with much press around its discovery in 2004.  It was going to be used to for everything – not least faster electronics and graphene touchscreens.  So, is it living up to expectations?

That was the question posed at a Cambridge Network event earlier this month. It brought together two expert speakers to consider graphene commercialisation now – and to discuss what the market forecasts might be like for this material in the coming years. 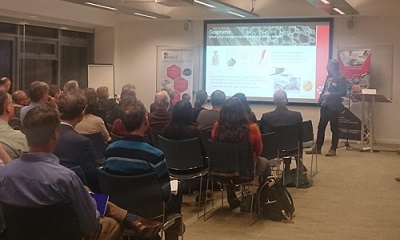 He told the meeting that graphene is the most conductive material in the world. It is fast, flexible, transparent and stronger than steel; the list goes on.  Paragraf, a University of Cambridge spinout now three years old, aims to deliver the speculated capabilities of graphene, particularly in electronics, to the real world.

Simon said that rather than trying to deliver the pristine graphene of theoretical science, Paragraf has targeted producing graphene with as high a quality as possible but more importantly in a format that is suitable for electronics and compatible with industry. Paragraf is currently making graphene electronics devices, including collaborating on applications which could provide a step change in the field of medical diagnostics and potentially save lives.  For Paragraf the future could include:

He added that it is an exciting time for Paragraf, with the company likely to expand to more than 50 employees very soon.

His answer was that in short, yes. It could be.  IDTechEx’s research – from numerous studies of companies, interviews, masterclasses and major consulting projects – confirmed that there is graphene in the market now; Huawei uses it in thermal management to spread heat; it’s also used in anti-corrosion coatings for offshore wind turbines and for mechanical performance of polymer pipelines. But while some Chinese and European companies are ramping up production, it is an expensive material. Graphene manufacturing must compete against cheaper carbon products such as carbon black, so there may be consolidation of some of these companies.

He noted that there are long lead times in advanced materials industries too, as seen by the adoption of carbon nanotubes. New areas such as energy storage or biosensors could be key.  The IDTechEx Show in Berlin this May will focus on graphene, and many other materials.

Cambridge Network's Business Lectures and Open Events are a series of meetings featuring industry and academia speakers from wide and varied disciplines, both from within Cambridge and further afield. If your organisation (company, university, charity, not-for-profit, etc)  is listed in the Network’s Directory, you are a member of Cambridge Network and may attend these talks free of charge.

Coming up on Thursday 26 March 2020: a free breakfast networking event on ‘The future of 5G inside buildings in the UK’   Find out more and sign up here