Work to begin on Chisholm Trail and Abbey Chesterton Bridge 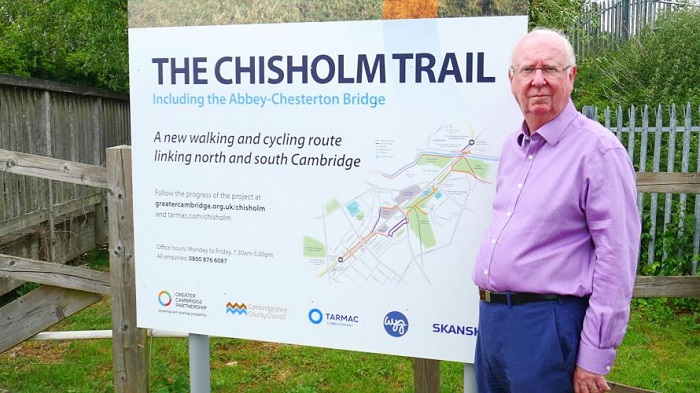 Work on the Chisholm Trail – a new first-class walking and cycling route across the city – will take an exciting step forward next month with the start of construction for the Abbey Chesterton Bridge.

The jetty which links the foot and cycle paths between Ditton Meadows and Stourbridge Common will be removed over the summer to enable construction to begin on the bridge.

Cyclists and pedestrians will need to follow a signed diversion along Ditton Walk, Newmarket Road and Garlic Row until construction on the bridge and new jetty is complete. The jetty is being kept open for as long as possible and the date of the closure will be advertised on signage in the area, with residents also being informed via letter.

Work is ongoing to lay the foundations of the new foot and cycle path and a 350m ‘haul road’ – used to bring in construction materials -  along the side of Ditton Meadow is nearly complete.

Cllr Ian Bates, Vice Chair of the Greater Cambridge Partnership, said: “The Chisholm Trail and Abbey Chesterton Bridge will be fantastic additions to our first-class cycling network that will make cycling and walking across Cambridge an attractive alternative to the car.

“In order to build the bridge, we need to close and remove the existing jetty which will, unfortunately, mean some disruption for people who currently travel through the area.

“When complete, this wonderful project that has long been championed by the community will provide a safe and enjoyable off-road walking and cycling link between the two main train stations, places of work and learning, and also open up beautiful lesser-used green spaces.”

The Chisholm Trail – first proposed by cycling campaigner Jim Chisholm and his colleagues in the late 1990s – will enable people to walk or ride on a mostly off-road route connecting Cambridge North to Cambridge Station, making it easier and safer to get around the city and access green spaces.

Phase one of the trail will focus on the north section from Cambridge North to Coldhams Lane which will open up green spaces, including the privately-owned Barnwell Lakes and Cambridge Past, Present and Future’s Leper Chapel, creating an off-road green route between Stourbridge and Coldhams Commons.

It will also join up to the Guided Busway at both Cambridge North and by Cambridge Station, providing an almost entirely off-road walking and cycling route between Trumpington and St Ives. Measures are in place to ensure the work has minimal impact on wildlife in the area.

Phase two of the GCP scheme will see the trail follow the railway line and link Cambridge Station to Coldhams Lane.

Further information and details about the construction phase and jetty closure will be made available at www.greatercambridge.org.uk/chisholm