Sensors for the real world 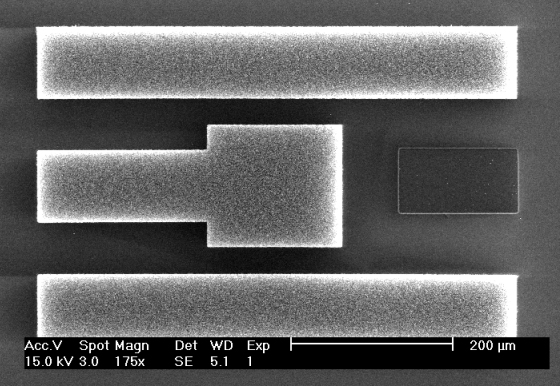 Over the past decade there has been an increased interest in developing resonators for gravitmetric sensing; however, the sensors’ response to variations in temperature has prevented them from being used outside the laboratory. New sensors developed by researchers at the University of Cambridge negate the effects of temperature so that they may be used in industries including health care, telecommunications and environmental monitoring.

Sensors built from high frequency bulk acoustic wave (BAW) resonators consist of a piezoelectric layer sandwiched between two electrodes, to which a variable frequency signal is applied. The resonator vibrates at a given frequency, and the properties of the resulting acoustic wave allow researchers to determine what is occurring in the environment.

The main application of these nanoscale sensors is to measure a mass load. By tracking changes in the acoustic wave, mass changes on the sensors can be detected. The resonators can be altered to detect a number of different things, from antigens/antibodies to environmental contaminants.

The major issue which has prevented the adoption of these resonators in commercial sensing applications has been their unwanted response to temperature. When the temperature changes, the acoustic wave changes along with it, so it is impossible to determine whether the change has been motivated by something the resonator is trying to detect or a change in temperature. For this reason, the use of these resonators has been limited to laboratories where environmental conditions can be tightly controlled.

Many researchers have attempted to compensate for the effects of temperature, but as these effects are non-linear, they can only be minimised, not eliminated completely. Now, researchers from the Department of Engineering have designed a thin film bulk acoustic wave resonator that allows simultaneous measurement of temperature and mass loading in a single device. The resonator has been designed so that it has two resonances which react differently to mass and temperature changes.

“This has two consequences,” says Dr Luis Garcia-Gancedo, a member of Dr Andrew Flewitt’s group in the Department of Engineering. “First, we are able to eliminate the effects of temperature completely regardless of its non-linearity. Secondly, we are able to measure mass and temperature with extremely high sensitivity at exactly the same location, which we haven’t been able to do before.”

With the assistance of Cambridge Enterprise, the team is looking at two primary applications for the resonators: biological systems and physical sensing. The resonators could be used for applications such as detecting viruses in a health care setting, or contaminants in drinking water. Other potential applications include air quality or pressure monitoring.

The resonator is able to detect masses to the order of 10-15 grams, which is approximately the size of one virus. The size of the resonator (typically a few micrometres square) means that they can easily be embedded in various devices.

Image: One of the sensors that has been fabricated using a thin layer of carbon nanotubes (CNTs) for electroding, in order to enhance sensitivity. The sensing area is the square at the centre.
Credit: Luis Garcia-Gancedo