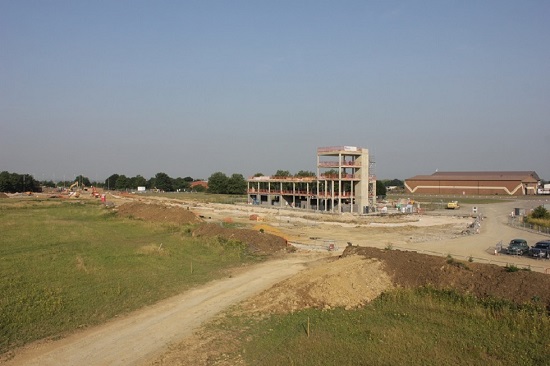 The transformation of the security gates of a former airfield into a stylish entrance to the Enterprise Campus at Alconbury Weald is now underway.

The former access will be refurbished into a landscaped entrance directing cars, bikes and pedestrians along a newly constructed boulevard lined with mature lime trees towards the Incubator, the first new building on site as part of the Enterprise Campus.

Currently all traffic, including HCVs, is using the Gatehouse entrance further north along Ermine Street which was opened in February.  On completion of the refurbished North Gate in December, the entrances will be split so that cars, bikes and pedestrians accessing the Incubator will use the North Gate  while all other traffic, including HCVs and construction traffic,  will continue to use the Gatehouse entrance.

Delivery of the work is being carried out by Huntingdon-based civil engineering company Breheny.

Approximately 2,000 trees and shrubs will be planted around the new entrance, creating the leafy and natural look which will set the tone for much of the future 700 acres of green space included in the development. The planting will consist of semi mature trees including Field Maples, Wild Cherry, English Oak and Crab Apple, interspersed with native woodland shrubs such as Common Hazel, Hawthorn, Privet, Blackthorn, Dog Rose and Guelder Rose.   Later in the year fully mature lime trees up to 10 metres tall will be planted along the boulevard as far as the Incubator building.

Tim Leathes, Project Director for Urban&Civic said: “From the outset one of our guiding principles has been to craft a place where the natural environment has a strong presence; the refurbished North Gate will show how we are starting as we mean to go on.   Some of the shrubs will come from our new onsite tree nursery where Alconbury Weald’s Tree Ranger Amrita Huggins is raising plants from seeds collected locally. Others will be bought in to show instant impact and create a more natural scene with trees of different sizes, ages and species. Progress on both the Incubator and the Boulevard entrance are all going well, and we can’t wait to open that entrance back up again towards the end of this year.”

Alconbury Enterprise Campus makes up a quarter of the overall development of Alconbury Weald and is owned by developers Urban&Civic, and supported by the Greater Cambridge Greater Peterborough Enterprise Partnership, and Cambridgeshire County and Huntingdonshire District Councils.