A book co-authored by Jaideep Prabhu, Jawaharlal Nehru Professor of Indian Business & Enterprise at Cambridge Judge Business School, on the unique Indian approach to innovating, has been translated into five languages in just 16 months. 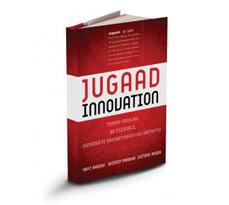 Jugaad Innovation now has editions in French, Japanese, Portuguese, Dutch and Italian (due out 2014) in addition to English and has sold 50k copies in India alone since it was published in June 2012. The book has also been a big hit in Japan and France.

Primarily written for business people, it has proved an unexpected crossover success, enjoyed by many mainstream readers beyond the core business audience.

Jugaad is a Hindi word that means an improvised solution born from ingenuity and intelligence. With its message of a ‘frugal and flexible approach to innovation for the 21st century’, Jugaad has struck a chord all over a world still struggling with the consequences of major economic turmoil and seeking radical new models for business success.

The book argues that the West must look to places like India, Brazil, and China for a new approach to innovation. The three authors, all from Indian backgrounds, show how jugaad is leading to dramatic growth in emerging markets and how Western companies can adopt jugaad innovation to succeed in a hypercompetitive world.

The authors are Jaideep Prabhu, Director of the Centre for India & Global Business at CJBS, Navi Radjou, an innovation and leadership strategist based in Silicon Valley and a Fellow at CJBS and Simone Ahuja, founder of Blood Orange, a marketing and strategy consultancy with expertise in innovation and emerging markets. Ahuja is an adviser to CJBS.

Prabhu, Radjou and Ahuja outline the six principles of jugaad innovation: seek opportunity in adversity; do more with less; think and act flexibly; keep it simple; include the margin and follow your heart. Featuring 20 large corporations, including Google, Facebook, 3M, Apple, Best Buy, GE, IBM, Nokia, Procter & Gamble, PepsiCo and Tata Group, the trio show how these major players are actively practicing jugaad innovation and tell new and compelling stories of resourceful jugaad innovators and entrepreneurs in emerging markets and the United States.

The book’s popularity is a sign that jugaad’s time has come, says Professor Prabhu.

"In our initial publicity for the book we said the time was right for jugaad practices and it looks like we were right! We are delighted with how the book has taken off. We are passionate about helping leaders everywhere to understand how to bring jugaad into their organizations.

"What we didn’t anticipate was how popular it would be in India itself, where jugaad was born. Another surprise was the book’s popularity in France and Japan. This seems to be because French and Japanese businesses are looking beyond western models that they feel have failed them and embracing new ideas – especially ideas from emerging economies.”

Dr Ahuja added: "Japan is facing increasing natural resource limitations so doing more with less will become increasingly important. Large companies must also drive greater innovation to bring Japan back to its place as an innovating superpower (as in the 80s). Nissan is doing exactly this by learning from Indian automakers, and applying the principles of jugaad innovation to their products for global markets, including modular cars and the recently unveiled Datsun for emerging markets like India and Indonesia.”

The three authors will find out on Monday (11 November) if they have won a prestigious Thinkers50 award for Jugaad Innovation. The awards are a pioneering global ranking of management thinkers with ideas that have the power to change the world and create a better future. Jugaad has been nominated in the Breakthrough Idea category which is named for CK Prahalad, the management thinker who first championed jugaad-type innovation to a global business audience.

Navi Radjou has also been nominated separately in the Thinkers50 Innovation category.