New sensor could prolong the lifespan of high-temperature engines 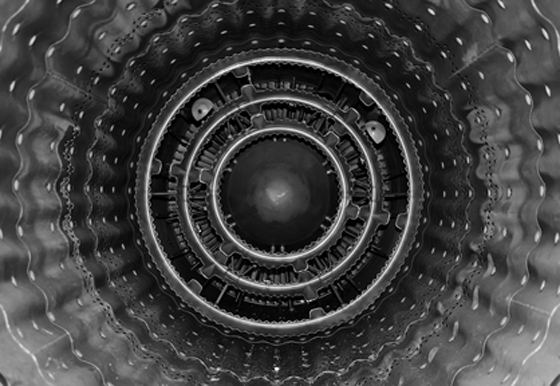 A new, highly-accurate temperature sensor could save manufacturers millions in maintenance costs, lower fuel consumption, and prolong the lifespan of jet engines, nuclear reactors and other types of large gas turbine engines.

“A better estimation of temperature can increase the lifetime of engine components and decrease maintenance costs to manufacturers, without any reduction in safety.” — Michele Scervini﻿

A temperature sensor developed by researchers at the University of Cambridge could improve the efficiency, control and safety of high-temperature engines. The sensor minimises drift –degradation of the sensor which results in faulty temperature readings and reduces the longevity of engine components.

Generally, the hotter a jet engine burns, the more power it generates, improving fuel efficiency, range and thrust. However, an accurate temperature reading is critical, as when temperatures get too high, the mechanical integrity of engine components could be at risk. A temperature error of just ten degrees can trigger engine failure, which can be a huge blow to aircraft manufacturers, as seen in the 2010 recall of Rolls-Royce’s Airbus A380 engines, which caused the company’s share price to drop by a massive nine per cent.

Modern jet engines can reach temperatures as high as 1500 degrees, but drift in the nickel-based thermocouples used to measure temperature increases to unacceptable levels at temperatures above 1000 degrees. Therefore, the thermocouple is placed away from the hottest part of the engine, and the maximum temperature is extrapolated from that point.

The inaccuracy resulting from this form of measurement means that the engine temperature, and therefore efficiency, has to be set below maximum in order to leave a safety margin for the survival of engine components. Thermocouples with increased temperature capabilities can be placed closer to the combustion chamber, increasing the accuracy with which the peak temperature is estimated, and decreasing the required safety margin.

“A more stable temperature sensor provides several advantages – a better estimation of temperature can increase the lifetime of engine components and decrease maintenance costs to manufacturers, without any reduction in safety,” said Dr Michele Scervini, a postdoctoral researcher in the Department of Materials Science and Metallurgy, who developed the new thermocouple.

In its simplest form, a thermocouple consists of two bare wires of two different metals joined together at their ends, with a voltmeter incorporated into the circuit. The difference between the two ends of the thermocouple is measured by the voltmeter and used to determine the temperature. This type of thermocouple is not suitable for high-temperature applications as the elements oxidise above 800 degrees, increasing the amount of drift, so thermocouples sheathed in oxidation-resistant materials were introduced in the 1970s. While this configuration addressed the issue of oxidation, the sheath contaminated the wires at temperatures above 1000 degrees, increasing drift.

Scervini, along with Dr Cathie Rae, has developed a thermocouple which both withstands oxidisation and minimises any contamination to the wires from the metallic sheath. The thermocouple is made of an outer wall of a conventional oxidisation-resistant nickel alloy which can withstand high temperatures, and an inner wall of a different, impurity-free nickel alloy which prevents contamination while reducing drift.

Results from tests on a prototype device showed a significant reduction in drift at temperatures of 1200 and 1300 degrees, meaning that a double-walled thermocouple can be used at temperatures well above the current limitation of 1000 degrees.

There are platinum-based thermocouples which can withstand higher temperatures, but their extremely high cost means that they are not widely used. “Nickel is an ideal material for these applications as it is a good compromise between cost and performance, but there is a gap in the market for applications above 1000 degrees,” said Scervini. “We believe our device could see widespread usage across a range of industries.”

The team are currently commercialising their invention with the assistance of Cambridge Enterprise, the University’s commercialisation arm, and have attracted interest from a range of industries. Tests on new prototypes are on-going.