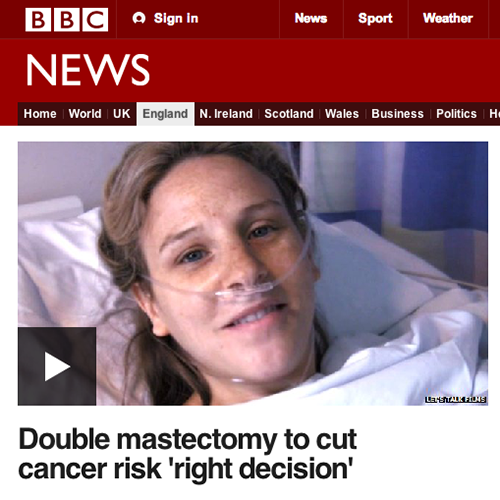 A recent project on which Cuttsy+ Cuttsy collaborated with their resident film maker John Scrivener has been featured on the BBC news and BBC Essex radio. ﻿

The film ‘Charlotte’ stars Charlotte Pittock, a young mother of three, who made the courageous decision to have a double mastectomy after being told she had an 85% risk of developing breast cancer in the future, following a positive BRCA 2 test.﻿

Media attention on the BRCA 2 gene and the risk of breast cancer has increased considerably following Angelina Jolie’s announcement of her decision to have preventative surgery and Carole Jackson’s on-going story in EastEnders.

Premiering at St Andrew’s Centre at Broomfield Hospital in Chelmsford where Charlotte's surgery took place, the film  ‘Charlotte’ has helped put this important yet highly sensitive subject in the spotlight once again by giving an insight into the bewildering world of breast reconstruction and the difficult decisions BRCA 2 women have to make.

The up-close and personal, honest and inspiring film charts Charlotte’s highs and lows and shares her story as she undergoes surgery and breast reconstruction - plus the impact of her decision on the people around her.

Mathew Cutts, Director, Cuttsy+ Cuttsy said: ‘We are very proud to be associated with this film and want to wish Charlotte lots of luck in her next challenge, as she trains for the London Marathon in aid of Breast Cancer Care.’

View Charlotte’s powerful story or see interviews with the stars of the film here﻿﻿.

Cuttsy+Cuttsy is a healthcare communications agency where people matter.