Scientists at MRC Human Nutrition Research have developed a new oral iron supplement that uses nanotechnology to mimic the natural structure of dietary iron. The nano-iron supplement is called IHAT and aims to treat iron deficiency anaemia – the world’s most common nutritional deficiency. 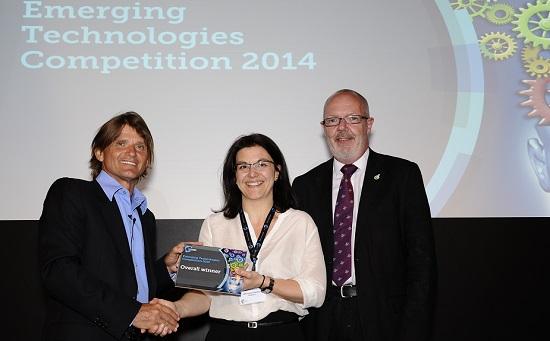 It replenishes blood iron stores almost as well as currently available iron supplements, according to a new human trial in the journal Nanomedicine, and is designed not to have the unpleasant gastrointestinal side-effects of current supplements.

The supplement recently won top prize at the Royal Society of Chemistry Emerging Technologies Competition – winning one-to-one mentoring from the competition’s multinational partners and £10,000 prize money, which was presented to the winners by the BBC’s ‘Dragon’s Den’ judge, Richard Farleigh.

Dr Dora Pereira, lead author on the paper and co-inventor of IHAT said: “I am delighted that our novel iron supplement has won the RSC competition; this will raise awareness of the problem of iron deficiency anaemia.”

“We hope to attract further funding to continue trials in humans with the aim of developing an effective and safe treatment for iron deficiency anaemia. After the 10 years hard work that we’ve put into basic research on how natural dietary iron is digested, and using that knowledge as a basis to develop this new technology, I feel very proud to have received this award.”

In the UK alone, iron deficiency anaemia affects 2 million pre-menopausal women and 1 million children. Lack of iron in the body leads to a reduction in the number of red blood cells, which are needed to carry oxygen in the blood. Effects of iron deficiency anaemia may include tiredness and lethargy, shortness of breath, heart palpitations and impaired cognitive development.

Iron deficiency can be treated with conventional cheap iron supplements that use a form of iron called ferrous iron, but this can cause inflammation in the gut and change the balance of the gut bacteria. Around one third of patients suffer from side-effects such as abdominal pain, heartburn, constipation or diarrhoea, which can cause people to stop taking the supplements.

Dr Jonathan Powell, co-inventor of IHAT and head of the Biomineral Research Group at MRC HNR said: “Current forms of oral iron are either toxic or expensive, and in some cases both, and these are significant barriers to the implementation of effective oral iron therapy. Patients don’t like side effects and health providers don’t like expensive therapeutics. IHAT is based upon understanding how dietary iron digestion works and all the evidence is that it is safe, side effect-free, well absorbed and cheap to manufacture. These are exciting times.”

The type of iron that occurs naturally in meat and vegetables is called ferritin, but ferritin is too expensive to isolate from foods to use as a supplement. The scientists at the HNR overcame this by creating an inexpensive synthetic mimic of the iron in ferritin.

They developed nanoparticles which are less than 10 nanometres in diameter – about 10,000 times smaller than the thickness of a sheet of paper – and stabilised them with safe dietary organic acids. These acids – tartaric and adipic acids – are found naturally in plants, such as grapes and bananas, and prevent clumping of the nanoparticles and therefore aid their absorption in the intestine.

In human trials, IHAT was about 80% as efficient as current ferrous iron supplements at replenishing the iron-containing protein in red blood cells called haemoglobin.

It was also not toxic to intestinal cells and was safe to the gut bacteria, in cell and rodent models.

The Medical Research Council has been at the forefront of scientific discovery to improve human health. Founded in 1913 to tackle tuberculosis, the MRC now invests taxpayers’ money in some of the best medical research in the world across every area of health. ...