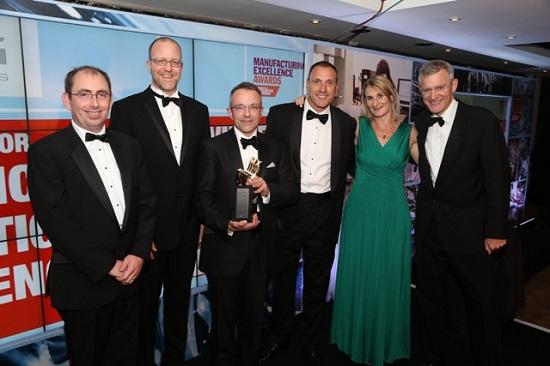 The company was presented with a trophy at a special ceremony on Tuesday (30 September) at WMG, University of Warwick, after winning the WMG Award for Logistics and Operational Efficiency.

“The company was rewarded specifically following its work to repair five UK RAF Hercules C-130J aircraft damaged in a severe hailstorm in Afghanistan in 2013.

“The company worked to exacting standards, in very challenging conditions and to very tight deadlines.

“The judges were particularly impressed that the company managed to replace the aircrafts’ damaged ailerons onsite in Kandahar and for one aircraft to return to service just eight weeks after the hailstorm.

“Marshall Aerospace and Defence is an exemplary company and it is encouraging to see such cutting-edge manufacturing thriving in Cambridge.”

Professor Lord Bhattacharyya, Chairman of WMG, said: “Congratulations to Marshall Aerospace and Defence Group on winning the WMG Award for Logistics and Operational Efficiency.  With so many excellent companies nominated, they did extremely well to succeed.  It just goes to show the excellence in manufacturing that exists in the UK.”

Steve Fitz-Gerald, Chief Executive of Marshall Aerospace and Defence Group, commented:  “On the eve of our 105th anniversary to win such a prestigious award is truly exceptional - this award recognises the dedication, hard work and determination of the team within the RAF, Lockheed Martin and Marshall Aerospace and Defence Group on project Weatherman. We succeed and deliver, together.”

The Manufacturing Excellence Awards programme has been helping UK manufacturing companies improve for over 30 years. This year marks the launch of a new, streamlined online process aimed at easing the path to gaining individually tailored expert advice.

The Manufacturing Excellence Awards was established in 1982 and is widely recognised in the business world for promoting the very best of UK manufacturing.

The 2014 Manufacturing Excellence Awards is run in partnership with AESSEAL®, The ERA Foundation, Grant Thornton, Lombard, NatWest, Renishaw and WMG. This year’s sponsor is Hexagon Metrology and Supporters are MAS (Manufacturing Advisory Service), the Department for Business and Innovation, the MTC, and Power Panels.

Read more about all the Manufacturing Excellence winners: www.imeche.org/event/manufacturing-excellence-awards/national-awards-2014-winners

The Institution of Mechanical Engineers was established in 1847 and has some of the world’s greatest engineers in its history books. It is one of the fastest growing professional engineering institutions. Headquartered in London, we have operations around the world and over 105,000 members in more than 140 countries working at the heart of the most important and dynamic industries such as the automotive, rail, aerospace, medical, power and construction industries.