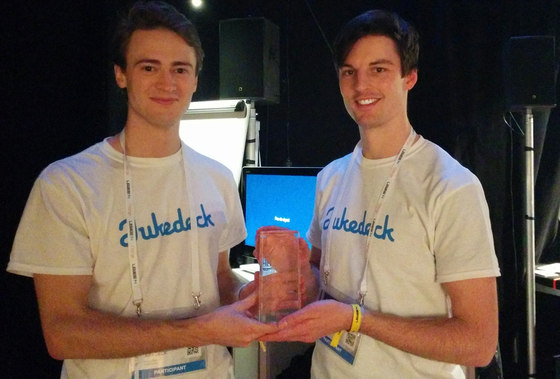 Jukedeck, a University of Cambridge start-up that offers computer-generated music to accompany on-line games and YouTube videos, has been awarded first place in the LeWeb Start-up Competition.

Jukedeck founders Ed Rex, a Faculty of Music graduate, and Patrick Stobbs, made their pitch with the help of a rap, which was set to music created on the spot by Jukedeck's generative software. Watch it here.

Asked by LeMaire to explain the future of art, Rex said Jukedeck is simply “trying to make a problem easier,” and that the startup “ultimately wants to be partnering with musicians,” not replacing them with machines.

Jukedeck's software uses algorithms to write songs in real-time and is able to adapt to a changing environment, perfect, for example, for videogame soundtracks. Because the music is original and is created by the user, it does not suffer from copyright restrictions.

Jukedeck has rasied £500k in seed funding to continue development of its software in a joint investement between Cambridge Enterprise, the commercialisation arm of the University of Cambridge and Cambridge Innovation Capital, an investor in high-growth technology companies in the Cambridge Cluster.