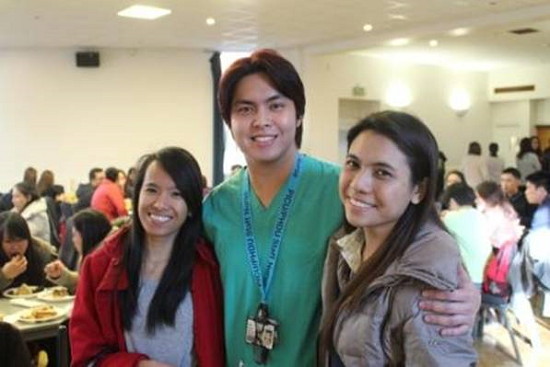 Cambridge University Hospitals (CUH) is welcoming over 100 highly skilled nurses to the Trust this month after a successful overseas recruitment drive.

Many of the nurses have been recruited from the Philippines, with 72 flying in from Asia last Thursday. Despite a 14-hour flight, they were excited and full of energy at their induction day at the Trust on Friday.

Earlier on in the month seven nurses joined from the EU and this Thursday another group of 25 nurses  arrived from Spain and Italy. In total, nearly 200 nurses have been recruited from outside the UK since August last year.

Chief Nurse Ann-Marie Ingle said: “Like many Trusts across England, we are working hard to recruit additional nurses in the midst of a national nursing shortage. We are making steady progress and it’s fantastic to welcome over 100 nurses this month. We are hugely appreciative that they have made the decision to join us.

“We have a long history of overseas colleagues joining us and one of things we’ve found is that the first few weeks are a really important part of their journey. It is paramount that they feel they know the local community, they understand how the city works and what the social life will be – so we make sure we build that into their orientation programme.

“This is part of our overall recruitment strategy at CUH and goes a long way to addressing the shortage of nurses that we and most hospitals are experiencing.”

As part of the selection process, the nurses had to pass more rigorous tests than nurses from the European Union have to undertake.

All the nurses recruited must become registered with the Nursing and Midwifery Council – which takes between three to six months – and will be supervised in the wards during this time.

Ana Maria Sapon, who joined the Trust from the Philippines 14 years ago and works as a ward manager, was there to greet the latest intake of nurses on their arrival.

She said: “Addenbrooke’s supports the nurses when they come over by finding them accommodation and any support they need to settle.

Ana Maria was unequivocal about what impact this intake will have upon patient care at CUH: “Having this new intake of staff will undoubtedly help patient care at Addenbrooke’s and will also improve the morale of all the staff.”

Ana Maria says that “nursing is a career where the skills apply all over the world” and that view is backed up by Chris Orleans, who was part of the first group that arrived in September. He said: “I’ve been a nurse for a total of five years now and nursing is pretty much the same the world over. I had been working in paediatrics in the Philippines and I’m in the Paediatric Intensive Care Unit here in Addenbrooke’s right now.”

Mark Ozaeta, also from the Philippines, is part of the latest group of nurses and he was attracted by the world-renowned reputation of Cambridge University Hospitals.

“I did a lot of research before coming and I was really excited to be working with some of the best specialists in the world at Addenbrooke’s.

“The fact that it’s a teaching hospital associated with the University of Cambridge was a big draw and I feel I will receive the training to fulfil my maximum potential.

“I would love to specialise in the Neuro Intensive Care Unit as that’s the area I worked in Philippines.”

This recruitment drive came as a result of a Nursing and Midwifery resourcing taskforce that was formed in early 2014 after shortages were identified and this is the second cohort of overseas nurses to arrive at Cambridge University Hospitals, the first of which arrived last September.

Cambridge University Hospitals (CUH) is one of the largest and best known hospitals in the country. As well as delivering care through Addenbrooke’s and the Rosie, it is also:
•a leading national centre for specialist treatment for rare or complex conditions
•a government-designated biomedical research centre
•one of only five academic health science centres in the UK
•a university teaching hospital with a worldwide reputation
•a partner in the development of the Cambridge Biomedical Campus

From last September, the breakdown of nurses recruited is as follows:
76 from the Philippines
1 from Canada
1 from Australia
32 from the EU excluding UK - 16 from Spain; 10 from Italy; 3 from Portugal; 3 from Poland