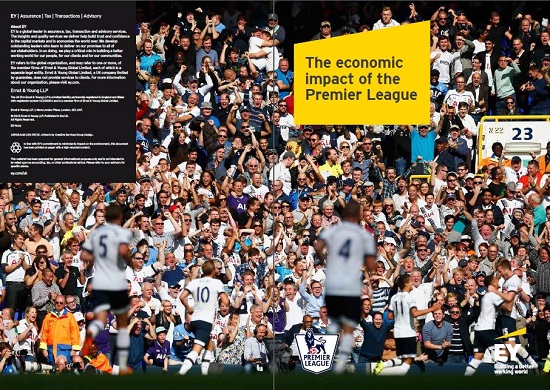 The Premier League and its Clubs contributed £3.4bn to UK GDP in 2013/14, according to a new report from EY.

EY’s Chief Economist, Mark Gregory, said that “The game of football is of considerable economic, social and cultural significance to the UK, and our report is the first attempt to quantify this.”

The report highlighted that while the primary role of the Premier League is to organise the football competition between the 20 Clubs that make up the league there is then a range of revenues – including ticketing, merchandising and broadcast revenues – that flow to the Clubs and beyond with significant consequent economic impact. These revenues have allowed Clubs to invest in all aspects of the game – including their squads, stadia and training facilities – which in turn has generated greater interest in the competition from football fans in the UK and overseas. As a consequence the Premier League has become the third largest sporting competition in the world by revenue, and the largest in Europe, outstripping the Bundesliga in Germany, La Liga in Spain and Serie A in Italy.

The distribution of these revenues to Premier League Clubs (and to clubs outside of the Premier League through the solidarity payments) has helped clubs across the football pyramid to invest in making improvements in all aspects of the game.

The author of the report, David Mullen an Assistant Director in EY’s Economic Advisory team said: “These estimates represent just a part of the economic impact of the Premier League and Clubs as there are other industries such as tourism, broadcasting and gambling that are also supported by the competition.”

The report also highlights the fact that the impact of the Premier League and Clubs goes beyond the economic as it generates a number of positive social impacts through its investment in facilities and support of a range of community programmes .  These programmes are helping to realise a range of health, education and social benefits through increased participation in sports and development of skills.