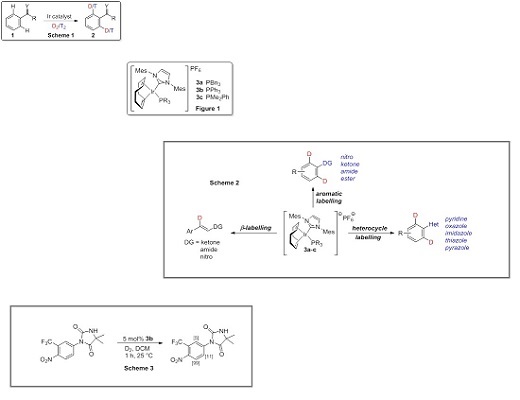 One of the biggest challenges facing the pharmaceutical industry is the high attrition rate of drug candidates at the pre-clinical trial stage. In order to address this issue, early metabo-lism studies are crucial in assessing the properties of a drug candidate.

An important meth-od in this area is labelling by hydrogen isotope exchange, which allows the biological fate of a potential drug molecule to be carefully monitored. In recent years, iridium complexes have garnered considerable attention within the field of transition metal-catalysed hydro-gen-isotope exchange.[1] The key to their applicability in this area lies in the ability of such complexes to selectively target unactivated C-H bonds, whilst simultaneously allowing con-venient isotope incorporation with the use of practically convenient deuterium or tritium gas (e.g. Scheme 1).

Indeed, a series of detailed studies within our laboratories has revealed a family of novel iridium complexes, possessing N-heterocyclic carbene (NHC) units alongside bulky phosphine ligands, to be stable yet active catalysts capable of incorporating deuterium to particularly high levels across a range of substrates at desirably low catalyst loadings.[2] First of all and importantly in a practical sense, a robust and readily utilisable route to these extremely stable complexes has been evolved. Furthermore, this has allowed expedient access to a range of novel iridium complexes of this type, many of which were, seemingly, inaccessible by previously employed pathways. Moreover, when employed with a broad selection of substrates, these catalysts have emerged to become some of the most active complexes in this area of labelling chemistry.

The three most effective iridium complexes from our first generation of catalysts, 3a-c, now commercialised by Strem, are shown in Figure 1. These catalysts are capable of efficiently mediating a range of labelling processes, with as low as 0.5 mol% loading in many cases.

Labelling of aromatic systems is directed by a broad range of functional groups, including ketones, amides (via both 5- and 6-membered metallacyclic intermediates, termed 5-mmi and 6-mmi), esters, nitroarenes, and an array of N-heterocycles, all with high levels of D-incorporation under mild conditions (Scheme 2).[2,3]Furthermore, we have recently extended this work to include the labelling of non-aromatic unsaturated systems, as illustrated by the b-labelling shown in Scheme 2.[4]

Catalysts 3a-c have also excelled in the labelling of complex, polyfunctional systems, such as those found in pharmaceuticals. For example, complex 3b catalyses the deuterium labelling of the drug nilutamide,[5] as depicted in Scheme 3, under mild reaction conditions in only one hour.