Trinity College Cambridge is celebrating a major milestone in the construction of one of the UK’s largest innovation centres, delivered in partnership with the Department for Business, Energy and Industrial Strategy and Central Working. 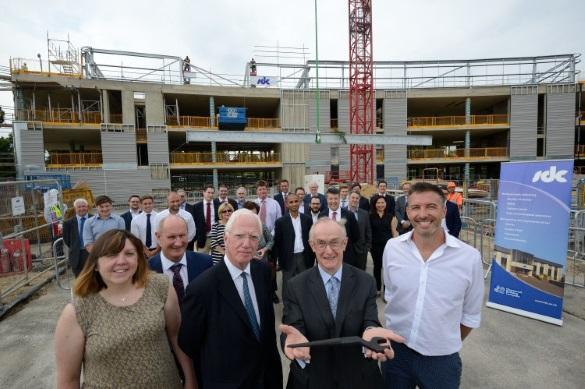 This summer’s topping out ceremony, which saw the final roof girder fitted into place, marked the start of a new construction phase for the £20 million John Bradfield Centre at Cambridge Science Park, which is set to open in 2017.

The ceremony, attended by Dr Jeremy Fairbrother, former Senior Bursar of Trinity College and James Layfield, CEO of Central Working, as well as some local entrepreneurs, marks the start of the interior works on the building, which will create a community of over 500 innovators.

Recent data from property consultants Bidwells, highlights continued strong demand for smaller space (up to 5,000 sq ft) from Cambridge’s growing business community. The current demand for this size of space in the city is 149,100 sq ft, the equivalent of two football pitches.

At the same time, however, data from StartUp Britain and the Centre for Entrepreneurs at the start of the year found that Cambridge start-ups per 1,000 people dropped from 15.9 in 2014 to 9 in 2015. The John Bradfield Centre is looking to reverse this decline.

The state-of-the-art John Bradfield Centre, designed by architects Aukett Swanke, will nurture scalable, high-growth businesses in Cambridge to create a community of over 500 innovators. Central Working, the collaborative workspace provider, will create and run the three-storey, 40,000 sq ft building to galvanise Cambridge’s booming tech sector, which historically has been driven by collaboration with the University and surrounding businesses.

The Department for Business, Energy and Industrial Strategy has donated £4.8 million to the project, which it is co-funding with Trinity College.

Key milestones since construction started on the John Bradfield Centre in February 2016 include:

Dr. Steve Marsh, alumni of Cambridge University and founder and CEO of locally based GeoSpock, comments: ”It’s really exciting to see the building taking shape. Entrepreneurs in Cambridge desperately need more spaces like this one, they are crucial hubs, not only for growing businesses beyond the idea stage, but are key in fostering a world-class entrepreneurial community.

“Unfortunately, despite Cambridge punching way above it’s weight in terms of idea generation – many people, especially young entrepreneurs, feel it is necessary to head to London in order to build their businesses. However, with more spaces like this, Cambridge will have all of the ingredients it needs to compete with the capital and allow it to retain the best ideas and talent.”

James Layfield, Central Working CEO, said: “Today’s ceremony moves us one step closer to the opening of this building, which is set to become a beacon for innovation and entrepreneurism in the UK. The John Bradfield Centre will bridge the gap between the education and business community, providing the next generation of entrepreneurs with the environment and support to thrive and succeed.

“While in previous years, many local businesses have been unable to resist the lure of London, we aim to make Cambridge an irresistible business hub for entrepreneurs across the UK.”

The Master of Trinity College and scientific entrepreneur, Sir Gregory Winter, said: “There are limits to the support and space that academic departments can give to spinning out ideas and technologies for commercial application. In the John Bradfield Centre we aim to provide a nurturing commercial environment for translating science into successful companies, and for turning scientists into successful entrepreneurs.”

Bidwells is project managing the development on behalf of Trinity College, and working with the Greater Cambridge Greater Peterborough Enterprise Partnership.

SDC Builders Ltd from Bedford have been appointed to construct this prestigious facility.

Nick Pettit, head of Project Management at Bidwells, added: “We are delighted to be involved in such an innovative building which is based within the heart of Cambridge Science Park and combines public and private office space, together with a new-style of working.”

Cambridge Science Park was established in 1970 by Trinity College, Cambridge and is Europe's longest-serving and largest centre for commercial research and development. ...