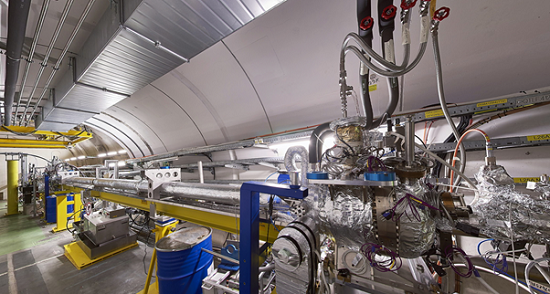 Cambridge product design and engineering firm, Wright Design Limited and its associate, GWA Limited, played a key role in a prestigious scientific first achieved at CERN, home of the Large Hadron Collider, at the close of 2016.

The company designed, fabricated and installed a major part of the experimental hardware and control system for the ground breaking AWAKE collaboration project, which achieved a major milestone in December.

Particle accelerators are used to research the very basics of matter by creating very high energy particle collisions.  Facilities like the 27km Large Hadron Collider at CERN on the Swiss/French border will be how most of the general public are aware of it.

The Advanced Proton Driven Plasma Wakefield Acceleration Experiment (AWAKE) is the first facility investigating the use of plasma wakefields driven by proton beams to accelerate charged particles.  The goal of the experiment is to research techniques which may allow the next generation of particle accelerators to be smaller in size and more powerful.

In the final week of CERN's accelerator operations for 2016, it has observed strong modulation of high-energy proton bunches in plasma, signalling the generation of very strong electromagnetic fields.  This is a significant step towards the goal of using the technique to accelerate electrons.

Wright Design was approached by experimental collaborator, The Max Planck Institute for Physics in Munich, to design the heating stages which create the conditions for the wakefield and allow the proton beams from the CERN system to be coupled in.

Project Manager Justin Pisani said “The design was a major challenge for us and we are really proud of the outcome.  As a unique experiment, we didn’t have any reference points to start with.  Coupled with that we had some really demanding performance requirements.  The system needs to operate at a very high and ultra stable temperature (around 230°C +/- 0.5°C), maybe not such a big deal until you see the stage is over 12 meters in length.

"Allowing the proton beams to pass through the system is like threading through the eye of a needle.  The system has to be straight to within 1mm alignment over the whole 12 meters.  The challenges of a very reactive plasma forming material, Rubidium, and safely integrating with high power lasers and ultra-high vacuums, made for a few late nights.  The sheer scale of the system is also a factor.  The system weighs in well over a ton and comprises over 1500 parts.  In addition to design and fabrication, we also undertook the installation of the system in the tunnels in CERN.”

“I find it amazing that the experiment worked the first time! The contribution of WDL & GWA was key in the success of the 2016 run, the first of many steps towards a possible plasma-based accelerator for high-energy physics,” adds Patric Muggli, AWAKE physics coordinator from CERN and the Max Planck Institute for Physics in Munich.

Wright Design Limited is an award- winning Cambridge based product design consultancy formed in 1996. It specialises in product design and realisation with manufacturing in UK and offshore. Previous clients have included household brands such as Meyer, Philips and Toro. www.wrightdesign.net

GWA Limited offers technical project and product management services along with product design services specialising in electronics and software.  Its founders have worked on a vast range of products over the last 20 years for diverse customers including the US Army and several well known local Cambridge tech companies. www.gw-associates.co.uk

The AWAKE collaboration and project has been proposed as an approach to accelerate an electron beam to the TeV energy regime in a single plasma section. To verify this novel technique, a proof-of-principle demonstration experiment is proposed by a proto-collaboration, using 400 GeV proton beams from the Super Proton Synchrotron at CERN.