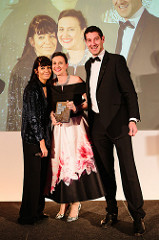 The Director of Talent at exams group Cambridge Assessment has won a major award in a ceremony which recognises the best of workplace learning from across the globe.

Cambridge Assessment’s Director of Talent has won a major award in a ceremony which recognises the best of workplace learning from across the globe.

Naomi Lockwood won gold in the Chief Learning Officer of the Year category in the Learning and Performance Institute annual Learning Awards. The award recognises Naomi’s achievements in building a culture of learning strategy at Cambridge Assessment, a global learning organisation which has its roots in assessment. A department of Cambridge University, the organisation designs and delivers assessments to more than eight million learners in over 170 countries.

“One of the challenges when I first came to Cambridge Assessment two-and-a-half years ago was how to build a culture of learning at an organisation whose mission is all about learning and education,” said Naomi, who was up against business heavyweights including Barclays and Dell in a record year for entries.

“Our strategy involved putting learning in people’s hands through enabling access to formal, informal, virtual and face-to-face learning. It has been just over a year since the launch of the strategy and the shift in the organisation and the thirst for learning can be seen across the Group.”

Naomi added that she was honoured by the support she had received from colleagues.

“It speaks volumes if your team believe in you so much to enter you for this sort of award and I was really touched by the testimonies that colleagues provided about the work I have been doing”, she said.

Naomi was promoted in January to the position of Director of Talent in which she oversees how Cambridge Assessment attracts, develops and engages its people. Naomi and her team have been focused on the development of globally accessible learning, linked to three key areas: Leadership and Management Development, Our Context and Business Effectiveness. At the heart of this strategy is the development through informal and experiential learning of ‘reflective practitioners’.

“At Cambridge Assessment we make sure we align learning with the overall organisational strategy, invest in areas that have the biggest impact and work in partnership with staff across the Group,” Naomi added.

“I am very proud of Naomi – she is an inspirational, values-led leader and the impact she has on the direction of learning and development within an international organisation like Cambridge Assessment is profound and is a core enabler of our goal to be a Times 100 Best Company to Work For. I am delighted for her - she really deserves this award.”

Naomi was presented with the award at a prize ceremony at London’s Dorchester Hotel. Speaking at the awards, sponsored by BCS Learning & Development Ltd, LPI Managing Director Ed Monk said: “With a record number of entries this year, to be a finalist is in itself an outstanding achievement”.