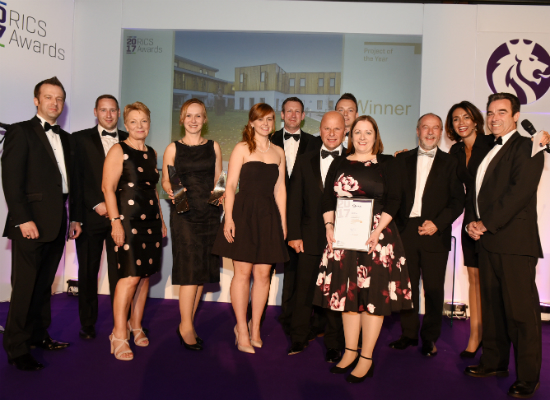 Arthur Rank Hospice’s £10.6 million home scooped the hotly contested Project Of The Year at the 2017 RICS East of England Awards which took place on Wednesday (10 May) at The Apex in Bury St Edmunds. Thirty six of the region’s most impressive and community beneficial property schemes battled it out at the evening hosted by Melissa Porter, best known for presenting the BBC programmes ‘To Buy or Not to Buy’ and ‘Escape to the Country’.

Designed by LSI Architects and constructed by Barnes Construction, the Arthur Rank Hospice was the winner of the Community Benefit category at the region’s ‘Property Oscars’. The building was then subsequently named the East of England Project of the Year at the prestigious construction awards, ahead of seven other category winners.

The Arthur Rank Hospice project will now go forward to the RICS Awards Grand Final, in the Community Benefit and Project of the Year categories, in London in November.

The Hospice’s new state-of-the-art building in Shelford Bottom is a new 23-bed facility: light, airy and modern in design, it meets the standards of a hospital without feeling like one. Private garden spaces and extensive use of timber has help avoid a clinical atmosphere.

Louise Knights, Architect at LSI Architects, comments of the accolade: “For the project to win the community benefit award and be named Project of the Year ahead of some fantastic projects is a significant achievement. The whole project team were greatly influenced and inspired by the passion and reputation of the Arthur Rank Hospice, the determination of the fundraising team and the caring nature of the staff and volunteers.”

Lynn Morgan, CEO of the Arthur Rank Hospice Charity, adds “This is a wonderful tribute to everyone who worked on the hospice - our fantastic architects LSI, Barnes who built it, Northmore Associates who did a wonderful job of project managing it, Munros, Faithful & Gould .... a great team that have done Cambridgeshire proud.”

The general public are invited to visit the building to see what it is like for themselves, on one of the Open Days planned across this year.

Image: The project team receive Project of the Year at the RICS Awards