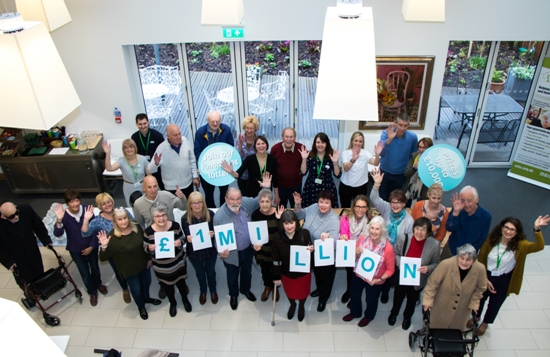 If you take part in 'Your Hospice Lottery' for Arthur Rank Hospice Charity, you may soon have helped raise £1 million for the Hospice! Thanks to supporters playing the weekly lottery for the Hospice, a grand total of £941,713.50 has now been raised to help fund the care provided every day by Arthur Rank Hospice, to those living with a life-limiting illness in Cambridgeshire (as of Monday 25 June).

Arthur Rank Hospice Charity’s partnership with 'Your Hospice Lottery' began in 2011. Just £58,286.50 remains, in order to take the funds raised by the lottery to its first £1 million by the end of September. This would equate to 2,230 people signing up to pledge their support to Arthur Rank Hospice through Your Hospice Lottery (less than 0.5% of the county’s population of around 621,210) playing for £1 a week.

In celebration of the approaching milestone, Arthur Rank Hospice organised for a few loyal players to visit them at a recent Hospice Open Day. One gentleman – whose wife had been cared for by the Hospice earlier in the year – explains why he feels the lottery is a great way to support it:

“Arthur Rank Hospice is a very worthwhile Charity to support: you never know when you might need them, for yourself or one of your relatives. The staff are so compassionate and caring, for the families - so much care for the family - as well as the patients. The Hospice and many of its services rely on regular donations for funding and the lottery is a wonderful way of providing that.

“I joined a couple of years ago when a fundraiser started talking to me at a shopping centre. He explained about the hospice and I signed up straight away. I just felt that I really wanted to support our local hospice. It’s not very much a month, it’s taken by direct debit, and I have won £10 twice!”

Another added “I signed up to 3 plays which is £13 a month. It’s great to know that I am playing 'Your Hospice Lottery' to support Arthur Rank Hospice. What’s £1 a week? It’s nothing and together with everyone else playing, it makes such a difference.”

Hopes are high that the £1 million target can be reached over summer. When broken down, the £941,713.50 already raised by 'Your Hospice Lottery' players could fund 1,995 episodes of Hospice at Home for patients being cared for in their own homes between the hours of 10pm and 7am (£472 per episode).

Once enough new players are recruited at £1 per week (£52 per year) to hit the £1 million total, the remaining £58,286.50 could fund a further 123 episodes of essential Hospice at Home care.

Director of Fundraising and Communications at Arthur Rank Hospice Charity, Donna Talbot, explains why everyone is a winner: “Many of our supporters really enjoy supporting Arthur Rank Hospice Charity via our 'Your Hospice Lottery'. It’s one of the easiest ways to give a regular donation, with the bonus that you could become a winner too: it happens much more frequently than you might think, with 136 guaranteed prizes on offer every week. I’ve seen lots of people over the years, who’ve been surprised to become winners, having never won anything else in their life before! It’s a really affordable way to support the Hospice … and how wonderful to know that you’ve been part of a group of people who will hopefully have raised £1 million for our vital Hospice services by the end of summer!”

Alex Howe, Head of Lottery at 'Your Hospice Lottery', adds: “We have been working with Arthur Rank for over 6 years now and have been overwhelmed by the astounding response we have received from the people of Cambridgeshire. There are currently over 7,800 numbers played by local supporters in the draw each week. We hope more people will follow suit and join in the fun. Becoming a player with Your Hospice Lottery for £1 per week, really does make a difference.”

To sign up or for more information visit arhc.org.uk/join-the-lottery.asp or call 0800 285 1390. Lottery players must be 16 or over. Alternatively, visitors to Arthur Rank Hospice can now sign up in person at the Hospice’s Bistro, thanks to a new wall-mounted tablet which allows supporters to input their details securely.

Arthur Rank Hospice needs to secure £7.45 million every year to deliver services free of charge to patients and their loved ones. About half of this currently comes from statutory sources, with further funds raised thanks to the wider local community – through initiatives like 'Your Hospice Lottery' - whose support is critical in helping us make every moment count.