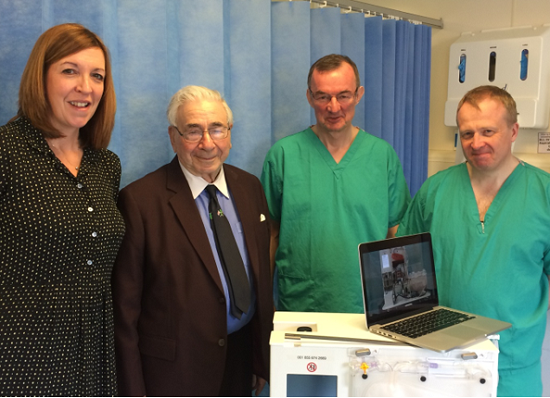 Cambridge University Hospitals performed four liver transplants in the 48 hours surrounding its 50th anniversary celebration of the first procedure in Europe, it has emerged.

The liver for the second operation was kept alive using the Trust’s newly unveiled perfusion machine, meaning surgeons could be confident it would still be in good condition when they had finished the first.

The quadruple success graphically illustrates the importance of a £250,000 appeal launched by Addenbrooke’s Charitable Trust to fund vital consumables – such as pipes and filters – which the machine uses during each procedure.

They were backed by a small army of other specialists comprising theatre nurses, anaesthetists, intensive care staff, the specialist nurses who worked with donors’ families and the transplant coordinators, who play a key role setting everything up.

Some had been at the transplant celebrations that day (2 May) including Prof Watson, who addressed assembled guests including the pioneer of liver transplantation himself, Sir Roy Calne.

All the patients, two men and two women, aged 50 to 67 and from various parts of the country, are said to be doing well following their surgery.

Professor Chris Watson, who developed the machine perfusion programme with Andy Butler, said: “This was a classic example of how important perfusion is. The team was able to complete the first transplant and catch their breath before transplanting the perfused liver, which remained in good condition. It is a significant step forward in transplantation, which is good news for the patient and the clinical teams.”

Lead nurse in charge of the 15-strong specialist Transplant Co-ordinator Team – often described as the ‘air traffic controllers’ of transplantation  - Stephen Bond said: “It was an incredibly busy time and fantastic that we were able to work together to do so many transplants in such a short time. However, the biggest thanks go to the donors and their families.”

Acting Chief Executive of Addenbrooke’s Charitable Trust, Shelly Thake, said she was overwhelmed by the public’s response to the £250,000 appeal. Contributions have come from a golden wedding couple who asked for donations rather than gifts, to sports fans who endured sponsored feats of stamina.

She said: “It is wonderful to know that within hours of the appeal being launched the perfusion machine was being used to help save a life. It is a clear sign of just how important the equipment – and our appeal to help run it – is viewed by the public.”

Anyone who wants to make a donation to the appeal can visit www.act4addenbrookes.org.uk/transplant

Cambridge University Hospitals (CUH) is one of the largest and best known hospitals in the country, delivering high-quality patient care through Addenbrooke’s and the Rosie Hospitals. CUH is a leading national centre for specialist treatment for rare or complex conditions and a university teaching hospital with a worldwide reputation.

CUH is a key partner in Cambridge University Health Partners (CUHP), one of only six academic health science centres in the UK, and is at the heart of the development of the Cambridge Biomedical Campus (CBC), which brings together on one site world-class biomedical research, patient care and education.  As part of the Campus development, Papworth Hospital is creating a bespoke, purpose-built hospital, and AstraZeneca is building a new global R&D centre and corporate headquarters.  The Campus is one of the government’s National Institute for Health Research (NIHR) comprehensive biomedical research centres.