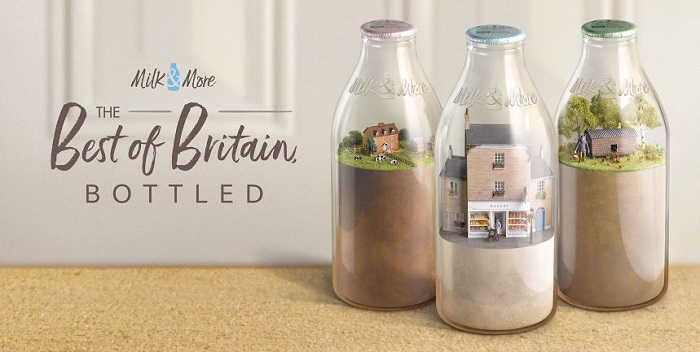 Mimesis Models’ client list is impressive. They have worked with British Airways, Network Rail and the O2 as well as Guinness, Thorntons and Range Rover as well as many other household brand names.

The models created by Mimesis Models are frequently used for advertising purposes, as was the case for the Milk & More project.

Milk & More is a company that is passionate about encouraging people to eat well and live sustainably. They strive to continue and build on the role of the traditional milkman by stocking products for home delivery to meet modern day needs.

As part of its marketing strategy, Milk & More approached Bray Leino, an advertising agency, to promote their milk distribution service with a brief to use traditional images of bygone eras.

Bray Leino used an illustrator to create conceptualised images of a chicken farm, a bakery and a farmhouse. With the illustrations in hand, Bray Leino then asked Mimesis Models to produce the three models based on the approved designs. 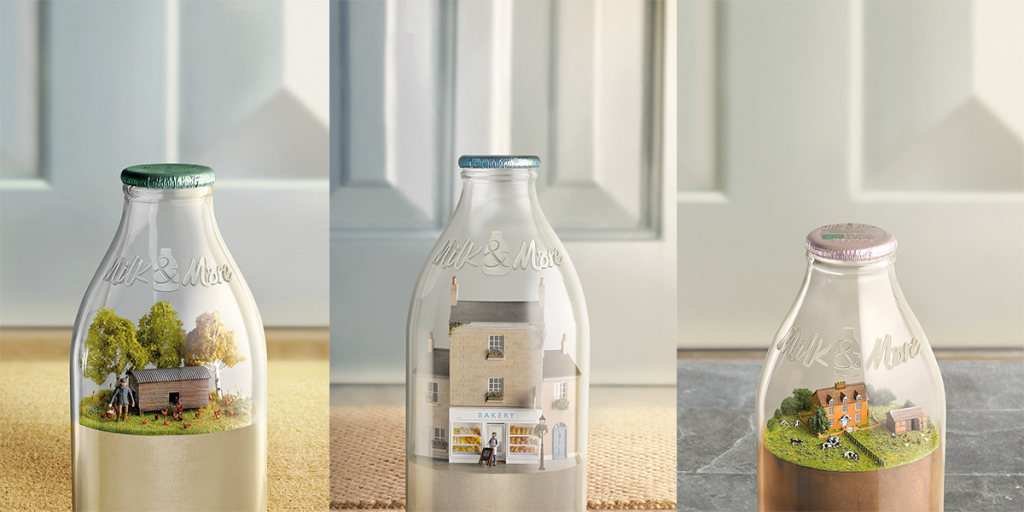 Mimesis Models could tackle the project in one of two ways. Either they could use the traditional, old school method of sculpting the models by hand, or they could opt for a more modern approach to model making and use 3D printing.

Martin headed to Prototype Projects in Royston to meet with Gary and the prototyping bureau’s managing director, Justin Pringle, to discuss the project in more detail. He could see great benefit in Prototype Projects’ new 3D print texturing service which can be applied to SLS and SLA 3D Prints. This new process was capable of applying the essential finer detail to the models, thereby saving valuable time. 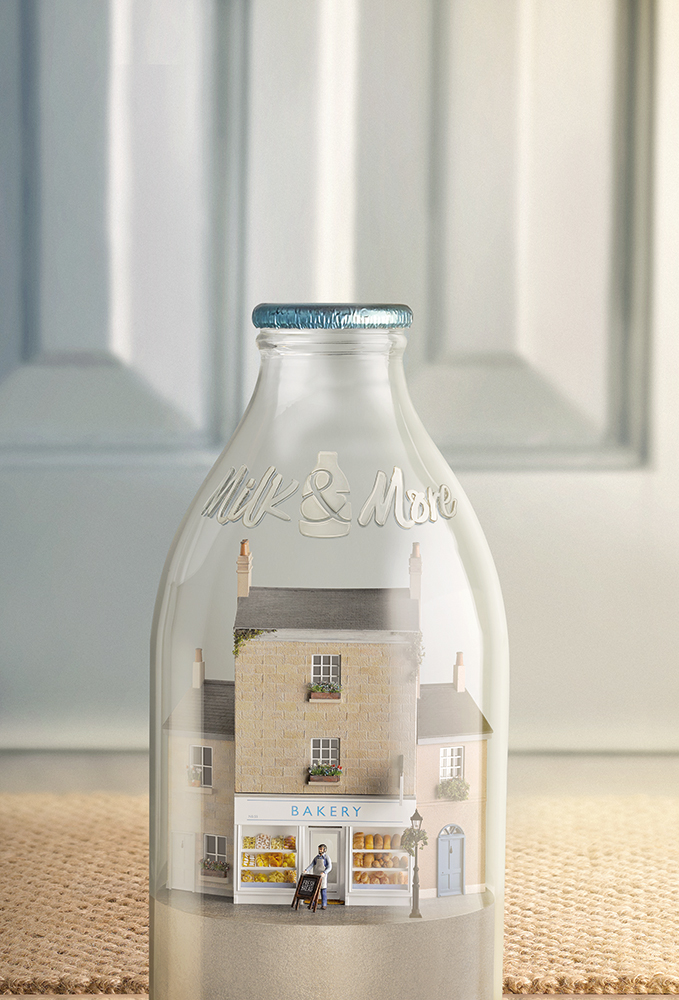 With a professional 3D printing expert in place, Mimesis Models now needed a product design expert to produce the necessary CAD files. Prototype Projects work with many such experts and so they recommended potential companies that they knew would listen to the brief and add creative input.

Martin opted to work with Cambridge Design Technology, a company ideally suited for this type of work given their previous collaborations making scale models with Scalextric and Airfix.

Conscious that the models would need to be hand-painted by Martin, Cambridge Design Technology worked to the approved illustrations and produced scaled and proportioned designs that would allow for easy painting. Each of the parts – from doors, door frames, walls to chimney pots and chimney stacks – were to be produced individually. This meant each part would be printed separately enabling Martin to reconstruct the models in a similar fashion to an Airfix kit.

The design files were sent to Mimesis Models in eDrawings so that Martin could rotate the 3D CAD renderings and zoom in if required. These were then sent to Bray Leino for approval, and on to Milk & More. 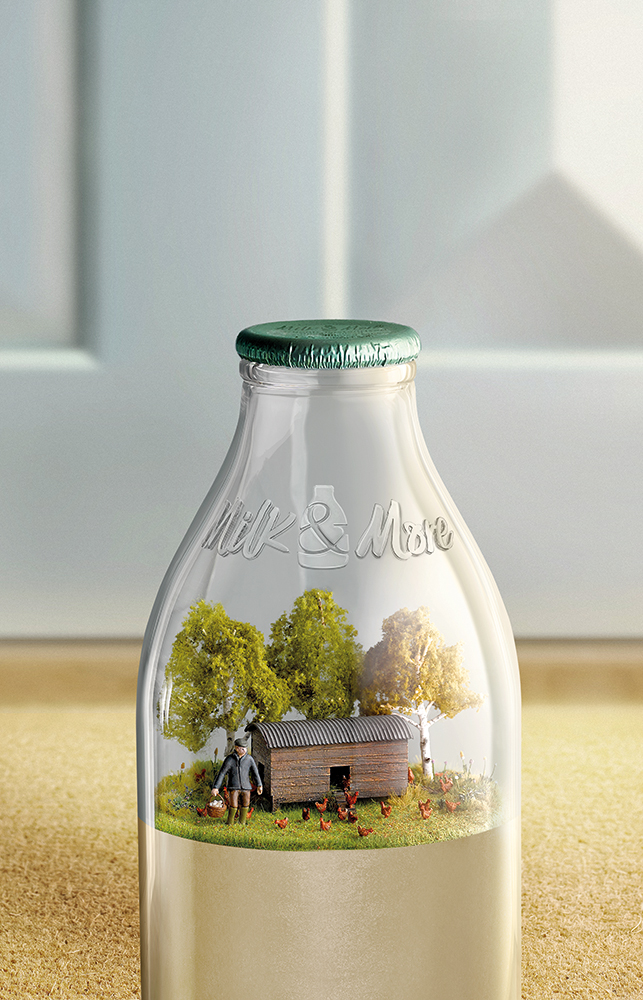 With the necessary approvals secured, Cambridge Design Technology passed the CAD files over to Prototype Projects.

Once all the parts had been printed, Prototype Projects packaged and labelled them for ease so that Martin could paint and build the models. 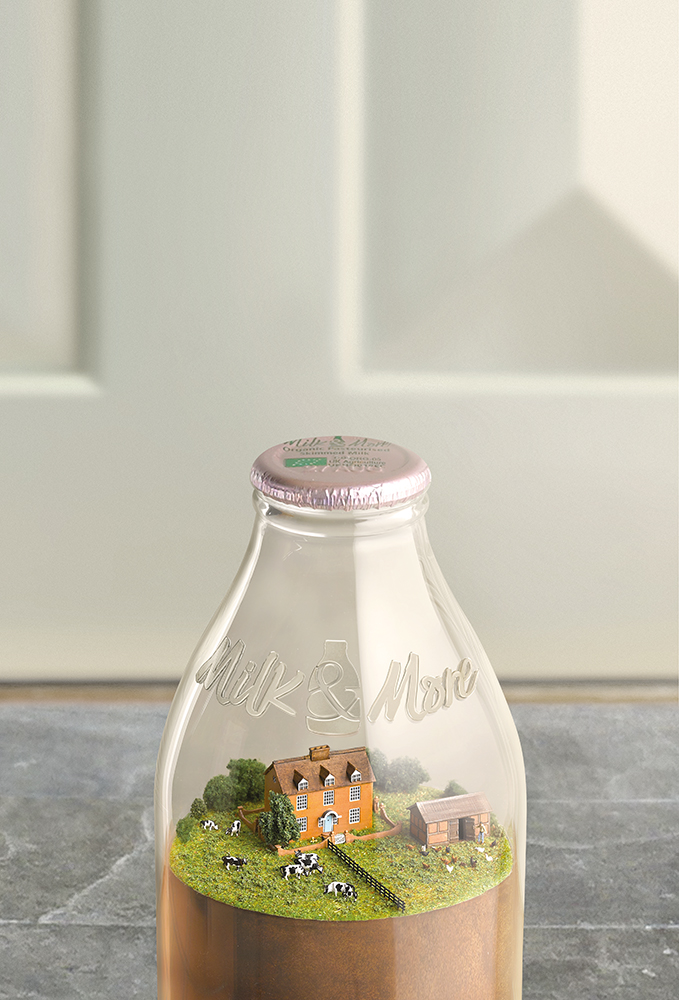 The quality of the texturing on the parts exceeded expectations. Martin said “the texturing applied by Prototype Projects really brought these 3D models to life. Also, the CAD work was incredible – the 5-bar gates were only 5mm high, yet because they were printed as separate parts, we were able to hand paint each one without risking overpainting adjacent elements”.

The parts, printed on one of Prototype Projects P6000’s SLA systems in Accura Xtreme material, arrived at Mimesis Models. Martin, and his colleague Jim, set about air brushing, dry brushing and spray painting all of the parts. Once painted, they were easily assembled and the finishing touches were applied to the models.

The final stage of the process was to place these intricate CAD-designed, 3D-printed, hand-painted models inside the milk bottles which had been produced by glass blowing experts, Aimer Glass.

With the completed 3D printed models carefully encased within their milk bottles, the final products were delivered to Bray Leino and Milk & More who were delighted with the results. The final models were photographed by Adrian Burke before being delivered to the client. These photographs have since been used as part of Milk & More’s The Best of Britain, Bottled advertising campaign.

Bray Leino sent a camera crew to capture the behind-the-scenes production of the models. Take a look…

“This was a fascinating project that brought experts across multiple disciplines together to create these models. Both Prototype Projects and Cambridge Design Technology were immensely professional and their work was of the highest quality. Cambridge Design Technology’s CAD work was carried out with the paint and build in mind which was enormously helpful to us. I have always been filled with confidence working with Prototype Projects. Their 3D print texturing capability added another dimension to the models and greatly reduced the overall timescale of the project and meant we could avoid manual texturing”.