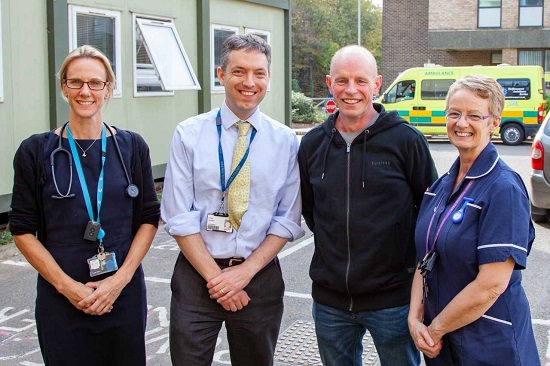 Addenbrooke’s Hospital in Cambridge has become the first NHS centre to pioneer a new generation of immunotherapy for patients with an aggressive form of skin cancer.

The hospital, which is part of Cambridge University Hospitals NHS Foundation Trust, is participating in a global research study to treat patients with advanced melanoma, which hasn’t responded to conventional treatments.

The study, harnessing immune cells called Tumour Infiltrating Lymphocytes (TILs), began in the USA and is now being brought to limited European specialist centres. Addenbrooke’s is the first NHS centre.

Sponsored by US-based Iovance Biotherapeutics Inc., it involves surgically removing some melanoma tumour tissue, separating out the TILs and growing them in a centralised production facility for approximately three weeks. Then they are returned to the hospital and administered to the patient via intravenous infusion.

This pioneering study involves co-ordination of multiple departments and disciplines. It paves the way for other complex cell-based therapies to be offered to other cancer patients in the future.

Stephen Blackburn, a 47-year-old father of two from Lincolnshire, received his TILs this September. Within weeks, his tumours started to shrink.

Trial lead consultant, Dr Pippa Corrie, said: “It is very clear that the immune system is critical in preventing, controlling and even curing some cancers. The experiment we have undertaken here is not unique, but previously it was thought to be unaffordable for the NHS. The escalating cost of cancer drugs means that one-time TIL therapy may prove cost-effective compared to chronic use of other modern biological and immunological therapies, although additional research is needed in this area.

“The best way to test new treatments is in research studies and the Iovance C-144-01 TIL study is the first of its kind to be endorsed by the National Institute of Health Research.

“The NHS is well placed to meet the challenge of delivering complex cancer interventions. Multiple departments and many people were involved in organising Stephen’s treatment. I am very proud that my Addenbrooke’s colleagues stepped up to the challenge and I would like to thank them all for the part they played.”

Cell therapy lead, Dr Ben Uttenthal, added: “This treatment is currently only available through the trial and only for patients who have no other treatment options left. If successful it will be hugely beneficial to patients with melanoma.

“It demonstrates that CUH is in the vanguard of centres able to deliver cell therapies for cancers. It is hoped this will be the first of many such immune cell therapies to be delivered on the Cell Therapy Unit for patients with many different conditions.”

Because there is such a complex set of regulations that govern the use of powerful investigational immune cell therapies, Addenbrooke’s has set up its own dedicated watchdog body, called the Advanced Therapy Medicinal Products group, which is chaired by Dr Uttenthal and is another first for the Trust.

This treatment is investigative and has not been approved by any regulatory agency.