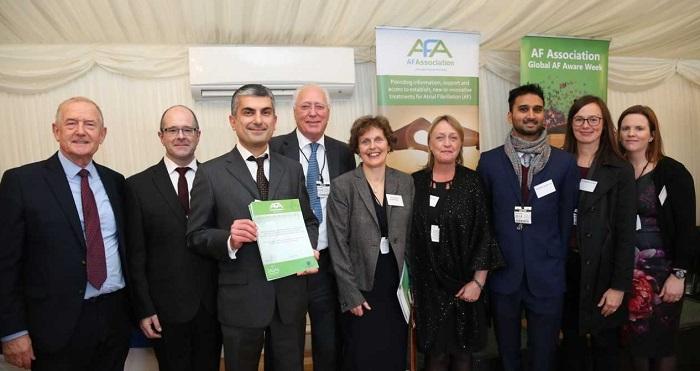 The successful diagnosis of Atrial Fibrillation (AF) and patients at high risk of AF-related stroke – which can cause disability, dementia and death – was recognised as best practice in this year’s AF Association Healthcare Pioneers Report 2019.

As part of the programme, supported by Eastern Academic Health Science Network (Eastern AHSN), all patients admitted are screened for AF and placed on anticoagulants to thin the blood if at risk.

On average 70 patients a day are screened by the Screening and Optimising Stroke Prevention in Atrial Fibrillation team (SOS-AF). It utilises the hospital’s award-winning Epic electronic patient record systems, which gives real-time access to medical records and electrocardiograms (ECG).

Not all patients are suitable for anticoagulants so an important aspect of the team’s work is to assess the risks and benefits.

In its first year, the service screened almost 15,000 patients and identified 393 new cases of AF. Overall 401 were started on stroke prevention measures, which prevented 16 potentially disabling strokes and eight deaths. In 158 cases, the team advised medical teams and GPs to not start anticoagulation.

The programme is crucial as AF is growing within the population. Over 21 per cent of medical admissions to CUH have AF, a stark contrast to previous estimates of around three to six cent. Rolling out screening into the community is also being considered.

The savings in 12 months the service has been running are around £500,000, based on  stroke prevention and bed days saved. The average length of stay of AF-related strokes is 15.9 days.

Founder and clinical lead for the SOS-AF service, stroke consultant Dr Kayvan Khadjooi, said: “This award is recognition of the excellent work that my team has done for our patients.

“Our objective is stroke prevention by focussing on one of the most important risk factors for disabling strokes, atrial fibrillation. By screening a high risk group of population (patients admitted to hospital), it is very cost-effective. I would like to thank my team for their hard work and applaud Eastern AHSN and CUH Management for their continued support."

Dr Amanda Buttery, AF Programme Manager at Eastern AHSN, said: “We are delighted with the team’s recognition from the AF Association. They have delivered outstanding results and we will be showcasing the impact they’re making in the region at our Preventing AF-related Stroke collaboration event on 7 February. It will hopefully encourage other hospitals to follow suit and we look forward to supporting them in developing these services.”