Benjamin Falcon, a postdoctoral researcher in Michel Goedert’s group in the MRC Laboratory of Molecular Biology's (LMB’s) Neurobiology Division, has been awarded the inaugural Alzheimer’s Research UK Rising Star Award in recognition of his significant contribution to biomedical dementia research as an early career researcher. 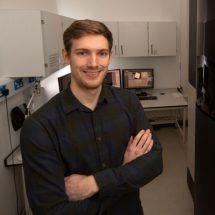 Benjamin has been studying the structures of filaments formed by the microtubule-associated protein tau with Michel Goedert and Sjors Scheres from the LMB’s Structural Studies Division. Misfolding and accumulation of tau into filamentous inclusions underlies a large number of neurodegenerative diseases, including Alzheimer’s disease. Using electron cryo-microscopy, Benjamin has determined the structures of the abnormal tau assemblies from patients with Alzheimer’s disease, the frontotemporal dementia Pick’s disease, and, most recently, from two ex-professional boxers and one former professional American football player who had suffered from repetitive head impacts and later developed the neurodegenerative disease chronic traumatic encephalopathy (CTE).

Together these studies of the abnormal tau folds associated with disease have shown that distinct folds are seen in each of the three diseases, but that structures do not vary between cases of the same disease. This has implications for the understanding of neurodegenerative diseases, as it is possible that characteristic differences between these diseases are driven by the distinct structures of tau filaments, as well as for diagnosis and potential development of new therapies.

Benjamin was awarded the LMB’s Brenner Postdoc Prize in 2018 and was an invited speaker at the 2018 Alzheimer’s Research UK annual conference, for which he won the Dick Bell Prize for Communication.

Benjamin received his award, which includes a grant to support his ongoing research, at the Alzheimer’s Research UK 2019 conference.